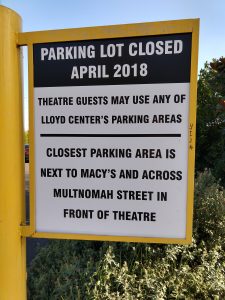 I walk through the Lloyd neighborhood (also called a district) almost every day. And this is an interesting area in central Portland with so many intriguing opportunities. Similar to the surface parking lots in NW Portland around NW 21st and Savier that are all turning into buildings, there is a lot of unused or very underutilized land between NE 16th and the river and NE Irving and NE Broadway.

There was a period of time about four years ago (around 2015-16) that I thought the neighborhood was about to pop. And unlike parts of Portland where there is a lot of existing housing (affordable or otherwise), the neighborhood is a lot of surface parking lots and low commercial buildings.

But things seem to have ground to a halt. So, what I want to ask, is what could this neighborhood be? What can we do right now to continue to use this space in the best way possible?